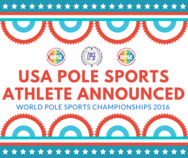 After the sad decision to revoke the endorsement of the USPSF National Championships for rule breaking, contingency plans were put in place to give those athletes the opportunity to qualify for the World Pole Sports Championships 2016. Athletes will have their video applications judged with a panel of 8 judges at the Mexican Open, head judged by the Vice-President of the International pole Sports Federation. A national Champion will be awarded in each category and the winners will be announced alongside the Mexican national and open winners on 30th April.

The following athletes will be competing: