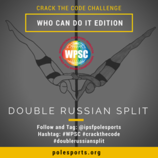 We've chosen one of the IPSF's Code of Points most infamous moves! The Double Russian Split! As far as we know, this has NEVER been done!! Will you be the FIRST to crack this IPSF doubles compulsory move, or perhaps have the most utterly entertaining attempt??!!

To enter, replicate this move using a split picture of the code drawing and your effort. Alternatively, film your attempts (mats and spotters most definitely required). Many attempts (pictures and videos) will be featured across our Social Media, and ALL attempts (good, bad or just plain hilarious), will be considered for the grand prize, TWO VIP TICKETS to the 2016 World Pole Sports Championships.